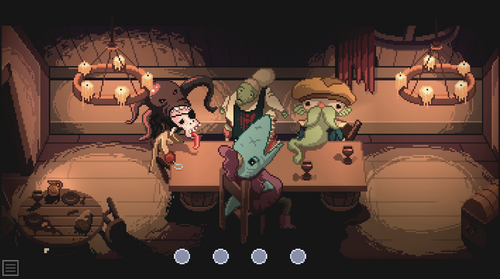 When Ms. Appleton wakes up in her tavern's kitchen, The Voice inside her head is still there. It won't leave her alone. It commands her to serve a very special meal to some distinguished customers.

Released on January 28th, 2020, The Supper is fourth in the critically acclaimed series of short adventure games by developer and pixel artist Octavi Navarro.

Explore, cook and solve puzzles in this delicious treat for adventure game fans. A tiny snack to consume while you make your afternoon coffee or right before bed!

The Supper is now available to download for free on Steam and itch.io.

Fans who'd like to support the development of future games, can do so by buying a PDF of the game's Art Book for $1.99.

Octavi Navarro is known for his work as an artist on Ron Gilbert's Thimbleweed Park and Luca Redwood's Photographs.

Exploration of the many faces of grief and depression is a frequent theme in Octavi's short games: from the decaying Library that is falling into monsters' hands in The Librarian, to the fear of the unknown in Midnight Scenes: The Goodbye Note, to the experience of fighting against one's own demons in The Supper.

All the previous games can be found on itch.io.

A bite-sized game by Octavi Navarro.

will there be a mac version? I really want to check this out, but don't have Windows :(

You could consider seeing if it works well as a WebGL build from Unity, too (if you made it in Unity).  That way, anyone could play it easily in a web browser, on any platform.  :)  Just a thought.

Maybe you can use an emulator ? I played the game on Linux using wine, I don't know if there is a similar alternative on Mac OS